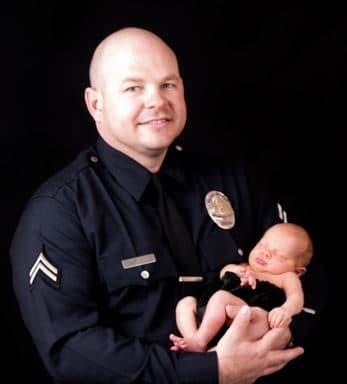 Until April 2009, I considered myself lucky to have not lost anyone close to me. Sadly, the loss of my Dad to leukemia was the start of an exceedingly difficult period of loss. He died only four weeks before my wedding. I then suffered the losses of my Grandpa, Grandma and Stepdad. The day my Stepdad died was the day my world came crashing down around me, it was September 23, 2014, the same day my husband, Officer Craig Majors, died by suicide. That day was my worst nightmare, and now, almost 7 years later at times I still can’t awaken.

At the age of 37, I became a widow with a 4-year-old to raise on my own. I didn’t know what to expect or how I was going to maneuver through life with the love of my life gone. The first year was very numbing, there was so much going on and so much to figure out that I don’t have time to truly grieve. With only one month of leave available, I knew I wouldn’t be ready to go back to my position as a dispatcher with the department Craig was employed. At the time, I wasn’t aware of the trauma I had suffered from 12 years as a dispatcher compounded by Craig’s suicide. Physically shaking at the thought of returning to work, I was terrified and suffering post traumatic stress, I knew that I would never be the same. Unable to return to dispatching, I was fortunate to secure a position at another division.

The second year was the hardest for me, I started to emerge from the numbness and all the feelings of loss, grief and horror came rushing at me. I honestly can say after all this time I don’t think I have really allowed myself to fully grieve; I’ve spent a lot of time pushing down my feelings despite knowing how unhealthy this is. I’ve tried counseling, but I never lasted long. We all have to find our path back to wholeness, but I’m not quite there yet.

The strength everyone sees, it’s just a façade. Does anyone ever reveal their true self?  Does everyone really want to hear how sad I truly am? How much I struggle? I smile and tell people I’m fine, unthinkable tragedy has that effect on you. Support isn’t readily available, it’s uncomfortable for most people. It’s not their fault, it’s just human nature. True friends, they are a gift. We are lucky to have people who understand and accept our forever grief.

My son is my distraction, everything I do and live for is him. Each day I get up and go to work knowing I am his only caretaker, our only source of income, and I must press on. After almost 7 years, there are still nights that I will cry myself to sleep because I miss Craig so much, the burden of our entire lives feels like it’s too much or I feel like I have failed so many times. It’s still an up and down roller coaster with a very steep incline.

At times, I am shocked at comments and remarks regarding me being a young widow. Two weeks after Craig took his life it started; people said that because I was young, I would find love again or asked when I would start dating. It all felt so insensitive to me, I’m sure they didn’t have any ill intent when saying those things and they probably didn’t think before saying it. I wanted to scream, “Are you serious? I just buried my husband and I’m not even sure how I got here. The love of my life is gone I can’t possibly think about replacing him!” This is such a lonely road to travel at times, it’s been almost 7 years and haven’t dated anyone. I am still asked if I am dating or when I am going to. Sometimes I feel ready because I really miss companionship; other times I am not sure and keep up my well-built walls. Suicide left a lot of hurt, fear and mistrust, getting past that and allowing someone else into my life isn’t easy.

I’m now a widow, I hate that word. I hate checking it off on forms. But I am not the only one affected, the day my husband took his life, he changed so many lives forever. My son no longer has his dad, his parents lost their son, his brothers lost a brother, and it trickles down from there. There will always be unanswered questions, “what if’s” and “if only’s” for which we’ll never have closure.

If you had told me when I got pregnant in 2009 that I would be raising my son alone, I would have laughed and said, “no way, that’s crazy talk”. That may be the hardest thing, my son losing his Dad. He was so young when it happened that I couldn’t even explain it to him, just that Daddy was in heaven.  At only 4, I knew he would not really remember his dad, lucky for him I am picture freak. We’ve got lots of scrapbooks for him to look at when he misses Dad or wants to remember the things we did together as a family. It breaks my heart that he has such few memories of his dad. Sadly, Craig was an alcoholic and suffered from depression that took so much control over him the last two years of his life he missed out on many family activities.

When a child loses a parent, we can typically explain the loss. Suicide isn’t simple, there’s no way to prepare a child for that knowledge. There’s no way to prepare yourself to explain a parent suicide to a child or answer all their questions. That conversation happened so much earlier than I thought it would, I had convinced myself he wouldn’t ask too much before the age of 10, but the conversation happened at age 7.

This was an important conversation, I needed to be honest while preserving his feelings of self-worth and his love for his Dad. Telling him the truth was important a few reasons; we need to break the stigma and talk about mental health and suicide, Craig’s suicide was a very public incident and he needed to hear it from me, not the internet and most importantly, he deserves to know the truth. He deserves to know that his Dad was a good man, with real problems and he is not to be judged for his actions. We will always love Craig for the man he was until his demons won.

The loss of Craig is really hard for him, even though most of the time he doesn’t show it. Every birthday, school event and family vacation are difficult. There is always a missing piece, someone asking where his Dad is and milestones where he stands without a man at his side. He’s seen the stigma associated with Craig’s death and he understands the path before us will be uneven. I know that, too. I may not have completely accepted it yet, but I know it. I know that no matter what, I have to navigate being a “suicide widow” for the rest of my life. I know that I have to raise a beautiful young man to have the courage to be honest, seek help and love his Dad without judgement. Suicide doesn’t leave ease or grace; it leaves hurt and destruction. I know that I have to be the best I can be for him and give him the best life possible, no matter how difficult or challenging it will and can be.