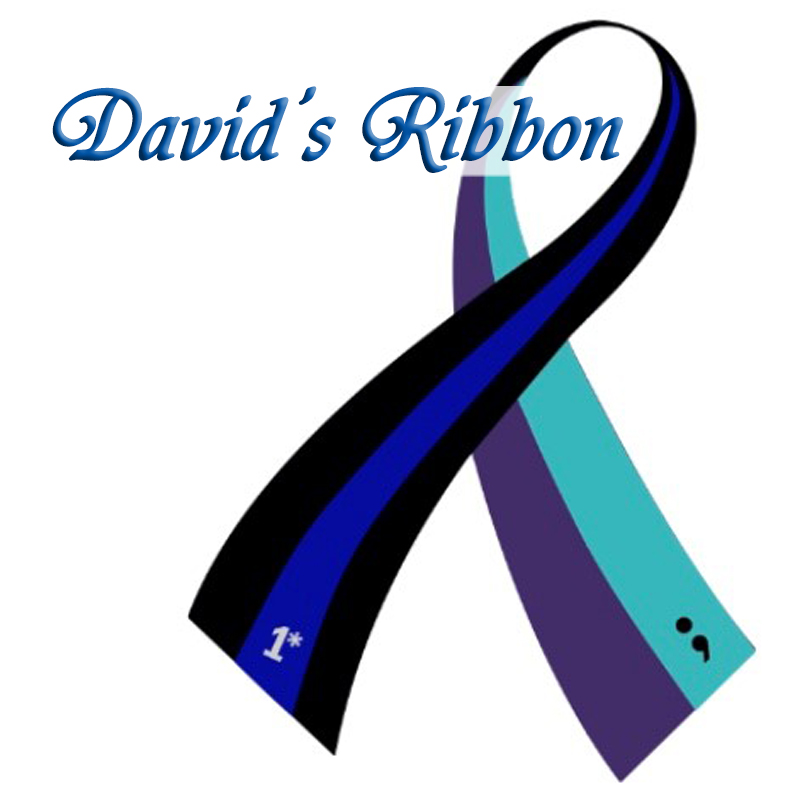 Grieving families often look for ways to prevent future suicides, assist where needed and find some way to fill the void in their lives. Whether it’s through advocacy, photography, writing or other means, they are fighting against suicide daily. We have been gifted a special symbol, a symbol created out of grief and love, desperation and courage….this is David’s Ribbon….

Being there for birth of my first son was the proudest day of my life.

Being there at his side after finding him after he took his life was my worst day.

A 24-year-old young man who, for all intents and purposes, had been by his own choice destined to follow in my career path. Had he lived, he’d be at the same PD where as many as 10 other coworkers’ sons all work together now side by side. He would have stood with them.

My son’s death by suicide means that he will not be able to sit with me in a roll call, partner up with me in a cruiser, as he did, soaking this culture in like a sponge, or try to keep up with me in a foot chase…he hated to run.

What it does mean is that by his death, his calling continues by a higher guardian. One that we can only hope includes the opening of dialogue among all those affected by suicide, trauma and the stigmas associated with it by being transparent about it.

Think about those you work with every day. Take care of each other, yourselves and your family. We swore to protect the people we serve and each other. If you’d take a bullet for your partner you can talk to them too, this is one time it is okay to let your guard down. Having lost a son as well as a close coworker to suicide within 2 years of one another, it is imperative that we take the U and I out of the suicide.

I no longer have that unmarked car we rode together in, seeing the empty seat he sat it in hurts too much. I do carry his badge in my wallet, his photo is taped behind my badge and I carry his handcuffs. My promise to him was that his death would not be in vain. Someone will live because of it and that means he is doing his job.

This ribbon was designed one day while I sat at my desk staring out at the Tobin bridge, a location many have chosen to end their lives. We had the thin blue line ribbon, suicide awareness colors and ribbons, semi-colons and the 1 asterisk symbols but nothing together so off I went, and Dave’s ribbon was created, symbolizing all of law enforcement who have lost their lives to suicide.

It is symbolic because he would have been the first person to help someone in need. With this ribbon we hope to branch off into other ideas with his spirit and mission so that all the other brother and sister officers lost will live on.

I am so humbled and honored to share this with Blue Help for all they do. They have blazed the trail to advocate for law enforcement suicide awareness around the world, and while this club is not one we want to subscribe to, it is a family that becomes instantly bonded by tragedy.

Note: A portion of all Blue H.E.L.P. merchandise sold bearing David’s Ribbon will be donated quarterly to the David Betz Scholarship Fund.